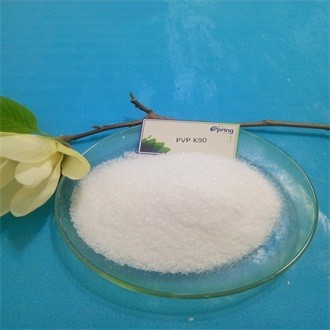 Povidone (polyvinylpyrrolidone, PVP) is used in the pharmaceutical industry as a synthetic polymer vehicle for dispersing and suspending drugs. It has multiple uses, including as a binder for tablets and capsules, a film former for ophthalmic solutions, to aid in flavoring liquids and chewable tablets, and as an adhesive for transdermal systems.

Povidone has the molecular formula of (C6H9NO)n and appears as a white to slightly off-white powder. Povidone formulations are widely used in the pharmaceutical industry due to their ability to dissolve in both water and oil solvents. The k number refers to the mean molecular weight of the povidone. Povidones with higher K-values (i.e., k90) are not usually given by injection due to their high molecular weights. The higher molecular weights prevent excretion by the kidneys and lead to accumulation in the body. The best-known example of povidone formulations is povidone-iodine, an important disinfectant.

Polyvinylpyrrolidone usually in the form of powder or solution exist. PVP in cosmetics mousse, eruption, and hair, paint, printing ink, textile, printing and dyeing, color picture tubes can be used as surface coating agents, dispersing agents, thickeners, binders. In medicine are most widely used binders for tablets, granules and so on.

Write your message here and send it to us